July is the month of the shears and the clippers, when roses and other plants are pruned.  Mid July is usually the right time for pruning, but where frost is heavy, pruning should only be carried out at the end of July or into the first week of August.

Roses:  Roses are the main subjects for pruning. If a rose plant is left unpruned, it will grow into a wild unkempt bush, with a tangle of dead and live wood, which is prone to attack by insects and disease. A pruned rose bush however, will give rise to healthy stems and leaves, and eventually, large well-shaped blooms.

There are two main stages of pruning:  the removal of all dead, spindly or diseased stems and the cutting back of several healthy young stems (which will give rise to the new season’s growth).  Only the new stems, produced during the last growing season should be retained (they are green or dark pink, with smooth bark). A well shaped bush starts its growth from close to the ground, so any healthy buds rising close to the ground should be retained. 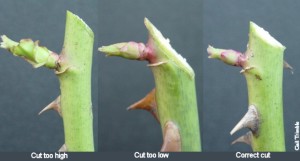 The first task is to cut off any old unsightly wood from the base of the plant.  Then remove any unhealthy, spindly, dead stems, cutting them down to ground level.  If there are more than three or four sturdy green stems left, choose those which will make for a good shape, and cut these back to about 25-40 cm (always cut at a slant just above a fat bud). After three or four week, examine the plants and remove any unnecessary twiggy growth.  Flowered stems (of climbers) should be cut down to three of four buds. Lay young stems horizontally to encourage new shoots to arise.  From then on, the main task is to keep rose bushes fed, watered and mulched.

Fruit Trees:  Deciduous fruit trees are pruned during the winter months.  Young trees need to be pruned to create a good shape.  Aim for an open or vase shape.  The main stems should be shortened to knee height, and any laterals should be cut back to half their length.  Apples and pears bear their fruit on old wood – so take out any old or weak growth, then cut back the ‘fruitful’ wood to two or three buds.  Peaches and nectarines bear on new young wood – aiming to have a vase-shaped tree with a good supply of new wood arising from the framework.  Plums and apricots do not need to be pruned except to remove unnecessary wood and to keep the trees in shape.

Other Shrub:  Can be tidied and pruned if necessary eg. abelia, spiraeas, fuchsias, coprosmas, leonotis and other summer flowering shrubs are among these. Take out all untidy or twiggy growth and cut back any stems or branches which are not performing well.

Copyright © 2015 Eden Garden Centre. All rights reserved. | Designed by NVmyBrand
PLEASE NOTE!! We recommend that you view this website with: MS IE 11+ of Google Chrome 1.0 or Mozilla 4.0